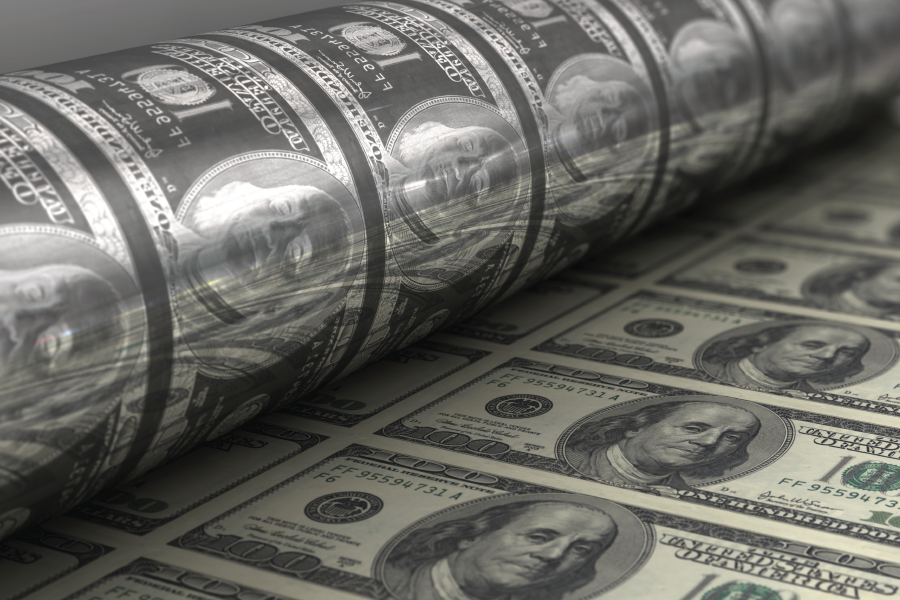 Modern Monetary Theory to the Rescue

he President and Congress have passed a $2 trillion stimulus package designed to prop up an economy upended by COVID-19 quarantine policies. This will push the total budget deficit in 2020 beyond $3 trillion dollars.  Before the coronavirus outbreak, the Fed was having to buy $100 billion per month to help finance a $1.2 trillion deficit.

In our opinion, the only plausible way to finance the new COVID-19 stimulus bill is for the Federal Reserve to print another few trillion and use it to buy more government debt.

This means that in the process of adopting the $2 trillion spending plan, the President and Congress have also joined Congresswoman Alexandria Ocasio-Cortez and others on the far left by adopting Modern Monetary Theory (“MMT”).

Despite the predictions of many economists at the time, these policies helped finance record deficits without generating the feared asset bubbles or systematic inflation.

In 2008, over leveraged banks, hedge funds, swap desks and homeowners had to meet sudden demands for repayment as asset prices collapsed.  This sudden deleveraging caused private credit to evaporate and sharply contracted the money supply.

A similar private sector deleveraging in 2020 is to a large extent explicitly prohibited by the terms of the bailout package (no foreclosures, loan payment forbearance, etc.). In addition, banks, hedge funds and homeowners are not nearly as leveraged as was the case in 2008.

That means that the private sector is not likely to suffer the shock deleveraging seen in 2008. If there is not a collapse in private sector leverage and credit, there will not be a private sector offset to all the money $3 trillion in QE could inject into the US economy. The result could be too much money chasing too few assets (asset price bubbles).

Another significant difference between 2008 and the current COVID-19 crises is that the economic problem in the wake of the housing bubble was too much supply. In 2008, the US economy had too many homes on the market, too many cars on dealer lots, and too many consumer goods stuck on retailer shelves because they were tied in some way to the housing market. Excess supply depressed prices.

By contrast, the current COVID-19 quarantine has forced production to shut down across innumerable industries. Once the pandemic has passed, the economic problem could be a scarcity of many goods across the economy. A scarcity of goods combined with unprecedented QE could lead to too much money chasing too few goods (inflation).

In the midst of volatile financial markets and continuing bad news regarding COVID-19, expressing worries about asset bubbles and/or inflation may seem farfetched. Indeed, we believe that the US could endure another 2 to 3 weeks of steadily worsening news on COVID-19.

Chinese and Italian data suggest that new cases peak about 3 weeks after a lockdown. If the US follows the same pattern, and we think that it will, then new cases will not peak until mid-April. Total cases and fatalities may not peak until the end of the month.

Financial markets typically anticipate improvements in relevant data before those improvements become apparent. Investors need to be forming their portfolio strategy now if they believe that COVID-19 data will show definitive improvement within the next several weeks.

Once the virus is contained, no one can predict how quickly the economy will recover from “shelter at home” policies and shutting down so many sectors of the economy. However, the President and Congress have made it clear that they will spend whatever it takes to get the economy back on its feet.

The Fed appears equally resolved to print whatever it takes to fund this spending.

The S&P 500 has bounced back above minor support at 2400 (the red line in the chart below). So long as the S&P 500 holds major support at 2100 (the green line), we believe the market is signaling a relatively quick economic recovery.

‍
Once the shock of the quarantine shutdown has worn off, we believe that Fed Chairman Powell could be placed in an impossible position. If he responds to a recovering US economy by ending QE, interest rates will probably rise. Rising rates could endanger the nascent recovery and would almost certainly elicit a Twitter storm from the White House.

Under those circumstances, the Fed is likely to choose the easy path and keep QE in place despite the potential consequences for asset prices and inflation.

We believe that investors should be prepared for potential asset price bubbles in equities, gold and home prices.

Home prices could be especially volatile, since housing supply was tight before mortgage rates dropped and the quarantine interrupted new construction. Riding bubbles is fun on the way up, but investors should have a definitive exit strategy for when the policies that created the bubble begin to change.

An exit strategy is particularly important since bonds may not provide a good hedge to equity volatility as rates approach zero.

Inflation may not be broad based enough to cause a spike in CPI or GDP based measures of inflation. The quarantine has created new work and shopping habits that may permanently alter demand for corporate office space along with brick and mortar retailers.

Oil prices may not be able to recover in the near future absent a new price agreement with the “Big 3” oil producers (US, Saudi Arabia and Russia).

Cheap energy could depress overall inflation. However, select areas of the economy that experienced supply interruptions combined with pent up demand could see a significant burst of inflation. Companies in these sectors will have pricing power and may see a much quicker than average return to profitability.

We believe sectors that may benefit from these conditions include health care, technology hardware and services, clothing, luxury goods and services (e.g. high-end restaurants, alcohol and perfume brands that diverted production to hand sanitizers, etc.), business travel and convention services.

MMT seems to have been embraced by all the major decision makers in Washington. The President, Congress and the Fed appear confident that printing money to finance a $3 trillion deficit will not cause bubbles in asset markets or inflation in the larger economy.

President Nixon observed during an earlier economic crisis that "we are all Keynesians now." President Trump and Congressional leaders can update that observation to state that "we all believe in Modern Monetary Theory now."

We believe that such aggressive use of the Fed’s printing press will result in asset bubbles and escalating inflation in certain sectors of the economy. If we are correct, the current market correction represents a good buying opportunity.

However, we are concerned that the key assumption about MMT is that policy makers will turn off the printing press if asset bubbles or inflation become a problem. We are not sure that our political and Federal Reserve leadership could withstand the pain of an early exit from MMT policies. Longer-term, an addiction to MMT could create far more painful economic dislocations than COVID-19.